Mother Agnes Mariam: “AN EXPERIENCE OF CURRENT LIFE IN SYRIA”

The following report, written by Mother Agnes Mariam in May 2012 from the monastery she headed in Qara, presents an account of a very human perspective of the ‘revolution’ in Syria. 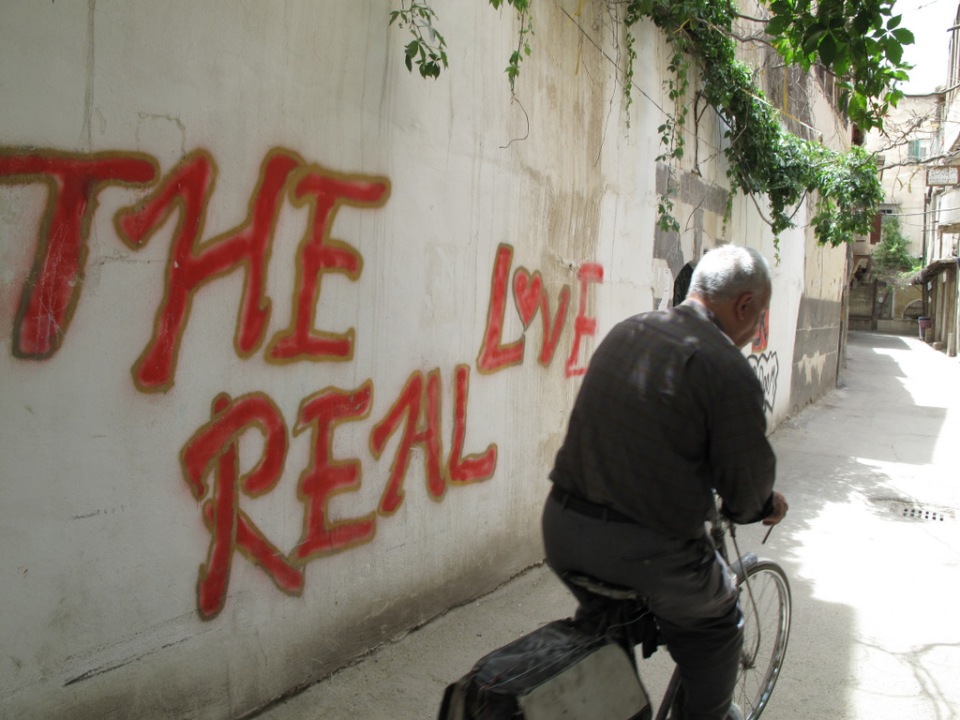 AN EXPERIENCE OF CURRENT LIFE IN SYRIA

The Christian families of Qara, Syria have been living in this same town for over a thousand years. Originally the town was entirely Christian, though the demography has changed gradually over the last three centuries. Now the Christian population is only 500 among 25000 Sunni Muslims. Although the Christians are a minority they are well respected and have always been on good terms with their Muslims brothers. Many Muslim families here will tell you they are descended from Christian families who embraced Islam in the time of the Mamluks.

After the recent fall of Bab Amr and other areas of the city of Homs, many refugee families of Sunni faith have found refuge in Qara where the revolutionaries have welcomed them in their gyms, mosques, cultural centers or in private residences. The superior of the Monastery of Saint James the Mutilated (Mar Yakub al-Muqataa) has visited these families and taken a census of more than 600 refugees, at least one third of which consider themselves insurgents of the “Free Syrian Army.”

The presence of these families of insurgents has rapidly transformed the daily life of the village of Qara. Unfortunately theft, vandalism, and kidnappings have been recently committed in Qara. Such crimes were very rare before but now have become a fashion increasing throughout Syria. Qara is a border town, known for contraband and smuggling, but the activity of the smugglers is limited by the vigilance of the Syrian regular army. Now apparently the smugglers of Qara are making money in a new way: through theft and ransoms. This trend is happening in the other towns of Syria’s “Kalamoon region” where we are located: Yabrud, Nebek, Deir Attieh. Armed gangs are kidnapping Syrian people and demanding ransom. The leaders of the local opposition are the ones who often mediate between the kidnappers and the families of the victims. The ransoms vary between $ 20000 and $ 40000 for the Christians kidnapped and between $ 1000 to $ 5000 for Muslims. The aggressors belong to bellicose tribes from the villages of Flitta, Baqaa, Maaret Yabrud or Yabrud. Often there is armed fighting between these gangs in order to divide the spoils or to gain supremacy.

Thus we have exposed the presence of these strangers by their nefarious behavior in Qara. Cars with tinted windshields and no license plate drive around day and night. The leaders of the opposition have become more authoritarian. They now appear armed and sport shiny new uniforms of the “Free Syrian Army”. They manipulate the situation through fear and intimidation, declaring worker strikes, curfews, or protests. To those who do not obey them, the “Free Syrian Army” is killing them, decrying the person to be a “collaborator” with the government. A Sunni colonel was shot in cold blood, and they refused him burial. They claim that they are “protecting the civil population from the shabihas,” that is, the government armed forces. In reality a security vacuum has been created, one that is being filled by armed gangs and terrorists.

Despite the peaceful declarations of the leaders of the local opposition, insurgents have more than once attempted to steal our harvest of crops and take our sheep. In response to our asking “Why?” they simply tell us, “Things are not like they used to be,” in other words: “the army will not be here to protect you any longer, so we can do to you whatever we want.” Many pleas were necessary to deter further abuse. But revenge came. One morning our poplar trees were ripped out, the entire grove was chopped down, and taken away. These grand and beautiful trees are endangered in Syria and they belonged to a nature preserve that we cared for with the Minister of Agriculture. The reason given by the opposition was that the people don’t want any trees around where the shepherds graze their sheep. This is a very cynical response, seeing as there is huge amount of space for the shepherds, literally millions of hectares are free.

But thus far we’ve said nothing because many others are suffering much more gravely than we are.

The disorder came to a new climax this very day. Another atrocity took place in Damascus the morning of May 10, 2012—the bombing of a highway overpass—killing 70 people and left 400 wounded. (That day our brother Jean Baudoin was on his way to the airport, and he passed by the spot of the a tragedy only a three minutes before the explosions. He also passed a school bus full of Greek Catholic school children who were blown up in the explosion.)

On top of this, that evening (yesterday) our dear Father George Louis was attacked in his home. George is the celebrating priest of Qara’s St Michael’s Greek Catholic church, in the historic center of Qara.

In the early dawn of the 11th of May two men, armed and masked, entered the home of Father George Louis as he was sleeping. At gunpoint they demanded his keys. Fearing that they would enter the church, Fr George tried to dissuade them in a friendly way. He refused to give them the keys. So they tied him up, and they smashed his head, cutting him with a broken glass bottle. One of them said, “We carved a cross in your head!” Indeed the wound from the glass was shaped like a cross. Then they beat him. Then they took the keys and the collection box with all the church’s money in it. They tied him to the toilet seat and began to strangle him with a pipe, but then they suddenly left having stolen his computer, phone, etc. It took Father George two hours to free himself. With his head still bleeding and his hands tied he was able to call one of his parishioners for help. They rushed him to a surgeon to stitch up his head.

Such an incident was unthinkable only a few months ago. In Syria Christians were formerly respected along with all minorities. But thanks in part to the “sectarian” slogans of Saudi and Qatari TV channels (Al Arabia and Al Jazeera) Christians are becoming an easy target. Racists, extremists, and criminals are taking advantage of the present situation, knowing their acts will remain unpunished.

After learning about the attack on Father George the whole village of Qara, both Muslim and Christian, rallied around their beloved priest and friend. The religious leaders unanimously denounced the aggression. Tomorrow the leaders of the opposition are invited to a meeting with the mother superior of the monastery. We must avoid religious-motivated violence.

His Beatitude Gregory III Laham, the Greek-Melkite Patriarch of Antioch and of all the Middle East, telephoned us to express us his profound sorrow and his paternal solidarity. The Patriarch was already shocked by the horrible terrorist bombings in Damascus of the day before. And he wept when informed of the details of the aggression suffered by Father George. Our Patriarch said “The disaster in our beloved Syria is nothing less than the dissolution of the entire society; it is absolute insecurity.”

He continued, “The feeling of the majority of the Syrian people is a deep anxiety. We see that blind acts of violence are everywhere and we have nowhere to take refuge. The danger is for everybody is the current chaos – but especially for the Christians, the Druzes, Alawites, Shiites, and the other religious minorities. Chaos is the strategy of the extremist opposition which is out-of-control and super-armed. Chaos weakens the state and seeks to create a situation of desperation and panic. The mutilations, bombings, and threats have a psychological aim: to bring the population to its knees. At every moment we are in total insecurity. Today in Syria we can no longer speak of a government – opposition division. There is a third element: the criminals who roam freely, taking advantage of the situation. They hide behind the opposition, and they exploit both the lack of armed forces and the absence of UN observers.”

We told the Patriarch that the Syrian army hesitated to come to Qara, although they were contacted by Muslim and Christian dignitaries of the village. Contrary to popular belief outside Syria, the army is afraid to start a conflict that would cost a lot of civilian bloodshed. Every Friday there is a protest flanked by armed men of the opposition who parade in front of the great mosque (just meters away from St Michael’s church).

His Beatitude the Patriarch commented: “As long as the government is in charge it must govern: this is international law. We cannot prevent a government from protecting its civilians. And the government must not give up this task. The revolution, in putting the opposition against the government has paralyzed the latter. It is as if there is no more government. The Syrian government is tied up and swept away by the international politics. Without any serious investigation they claim the government perpetrates massacres and bombs civilians. Meanwhile the barbarous acts by the insurgents pass by without a word. For these reasons the people are crying for our help. They ask that we help the existing government. There is a legitimate government who must govern. If it is destroyed there will be nothing to replace it. Unfortunately we see that the international community aims to make the situation worse, divide Syria and provoke conflict. By arming and supporting forces that are out of control we are pushing the country towards more violence, terror, and bloodshed. I address the international community: save Syria. Save Syria’s exemplary coexistence of Muslims and Christians being pushed into an exodus by fear of chaos and crime.”

The Patriarch finished in prayer: “Damascus, the oldest populated capital of the world, welcomed Saul the persecutor. Within Damascus’ walls he was transformed into Paul, the Apostle to the nations. Today Damascus is where we encounter those who are persecuted. With the help of heaven, the Risen Christ who rose from the dead and who is forever faithful with our distress, Damascus can once again become the place of a conversion that will change the world, of the interior transformation and of the great reconciliation. Lord, look upon us from heaven and act with your mercy, you O God, the Lover of mankind.”

These heartrending events must raise questions to all people of good will. Is it right for a country to be destabilized by an insurgency that refuses all dialogue, tends toward religious extremism, and reflects only a minority of the population? Is it acceptable for them to shelter outlaws who terrorize the population with bombings, mutilation of religious leaders, and kidnappings? A state without law is not a state. The consequences are dramatic for all the civilians. How can we stand by with our arms crossed?